The President of the Republic, His Excellency Paul BIYA held cordial talks with the Prince and Grand Master of the Sovereign Military Order of Malta at the Unity Palace on 17 July 2018. This audience was the climax of His Most Eminent Highness, Fra’ Giacomo Dalla Torre del Tempio di Sanguinetto’s four-day official visit to Cameroon. 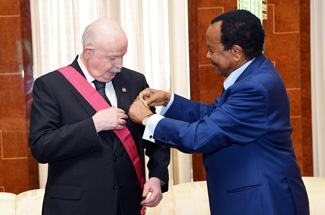 The Head of State and the Grand Master reviewed the 57-year-old bilateral cooperation that exist between Cameroon and the Sovereign Order of Malta. They agreed to deepen ties especially in the field of health and humanitarian aid – the main missions of the Sovereign Military Order of Malta. It should be noted that the Order runs a modern hospital in Cameroon – the Saint John of Malta Hospital in Njombe, Littoral Region, which will be visited by the Grand Master. The Head of State and Fra’ Giacomo Dalla Torre del Tempio di Sanguinetto also agreed to continuously strengthen the capacity of the hospital, which is at the service of all Cameroonians. 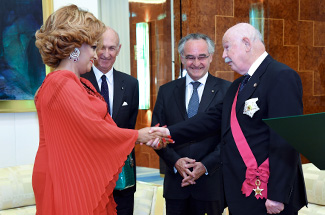 In the humanitarian field, Cameroon relies on the moral authority of the Sovereign Order of Malta at the international level to mobilise the necessary support for the management of refugees and displaced persons. Fra’ Giacomo Dalla Torre del Tempio di Sanguinetto will pay a visit, on 18 July 2018, to the Gado-Badzere refugee camp in the East region. The camp host more than 24,000 Central African refugees. The Grand Master will certainly realise that Cameroon is a safe haven to foreigners in distress. He will also recognise the legendary hospitality and the humanist spirit of the Cameroonian people. Thus, Cameroon deserves more support in this domain. 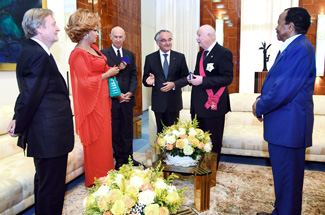 H.E. Paul BIYA and the Grand Master were joined at the end of their talks by the First Lady of Cameroon – Mrs Chantal BIYA. The Head of State’s illustrious guest presented his compliments on the outstanding accomplishments of the Chantal BIYA Foundation.

His Most Eminent Highness, Fra’ Giacomo Dalla Torre del Tempio di Sanguinetto was decorated by the Head of State with a medal of Grand Cross of the Order of Valour. This was followed by an exchange of gifts by both personalities. Mrs Chantal BIYA also received a magnificent gift from the Grand Master: a rosary.