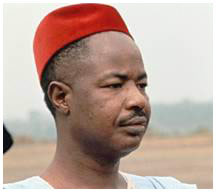 Ahmadou BABATOURA AHIDJO was born on August 24, 1924 in Garoua.

Born into a Fulbe family, he grew up in the Muslim faith.

He had his CEPE (First School Leaving Certificate) in 1939

He graduated from Ecole Primaire Superieure, Yaoundé in 1942. He became a telegrapher in the civil service and later that same year, became a radio operator.

He was elected member of the Territorial Assembly of Cameroon (ATCAM) in 1943. In 1952 he became Adviser of the Assembly of French Union and Vice President 1956. He was Vice Prime Minister in charge of Internal Affairs after Cameroon gained internal autonomy in   February 1957 and later on became the Minister of Internal Affairs in May 1957. On February 18, 1958, he took over from Andre Marie Mbida as the new Prime Minister of Cameroon. He was elected President of the Republic of Cameroon in May 1960. He was the architect of the Reunification of Cameroon in 1961. In 1966, he instituted the one party system. On Thursday, July 4, 1982, Ahmadou Ahidjo resigned as President of the United Republic of Cameroon. He was succeeded by Paul Biya on November 6, 1982.