After a brief private visit to Europe, the President of the Republic His Excellency Paul BIYA and Madam Chantal BIYA returned to the nation’s capital on Friday 9 September 2016. 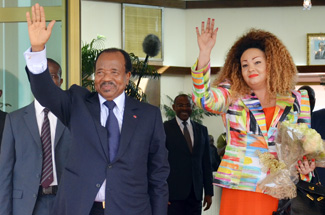 The Head of State was greeted at the foot of the plane by the President of the Senate, Marcel NIAT NJIFENJI; the Vice Speaker of the National Assembly, Hilarion ETONG; the Prime Minister Head of Government, Philemon YANG; and the Secretary General of the Presidency of the Republic, Ferdinand NGOH NGOH.

First Lady Chantal BIYA was given a welcome bouquet of flowers by a pupil of the “Coccinelles du Palais” school complex.

Before departing from the airport, President Paul BIYA granted audiences to the President of the Senate, the Prime Minister and the Secretary General of the Presidency of the Republic.

Meanwhile the First Lady was having a cheerful chat with the wives of the close collaborators of the Head of State.

The motorcade of the Presidential Couple arrived Unity Palace at about 5.30 pm to applause from some dance groups.