The President of the Republic of Cameroon, His Excellency Paul BIYA has closed the 10th edition of the Women’s Africa Cup of Nations. The final game of the successfully organised tournament, which began on 19 November 2016, was played on Saturday 03 December 2016 at the Yaounde Omnisports Stadium. 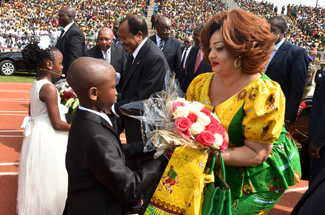 The closing ceremony of the competition, which celebrated Africa’s rising fraternity, was presided over by President Paul BIYA, in the presence of First Lady Chantal BIYA.

This was followed by a nail-biting encounter between the Indomitable Lionesses of Cameroon and the Super Falcons of Nigeria. The defending champions pulled a narrow win (1-0). They sealed their eighth title through ace striker, Desire Oparanozie at the 84th minute.

Cameroon-born Issa Hayatou, President of the Confederation of African Football, paid homage to H.E. Paul BIYA for his tact, which facilitated the entire organisation of the tourney in Cameroon. He symbolically passed the trophy to the Head of State who later handed it to the Nigerian captain, Rita Chikwelu. 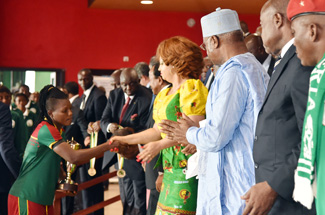 Eight teams, divided in two groups, participated in the 2016 Women’s AFCON. Cameroon, South Africa, Zimbabwe and Egypt challenged each other at the renovated Yaounde Omnisports Stadium. The teams in Group B; Nigeria, Ghana, Mali, and Kenya played at the newly constructed Limbe Omnisports Stadium