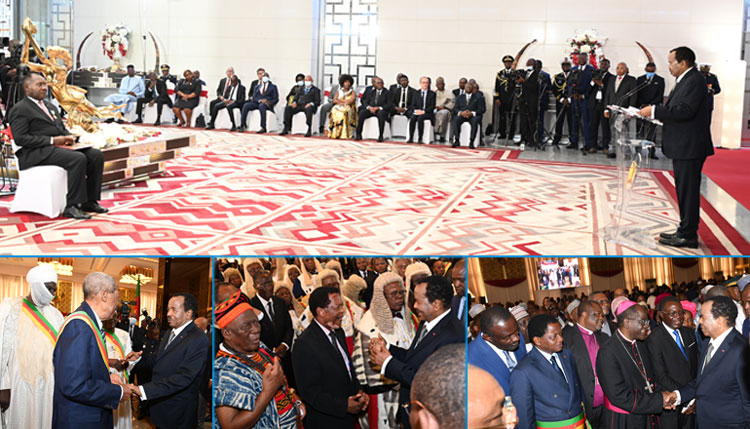 The President of the Republic, His Excellency Paul BIYA received New Year wishes from Members of the Diplomatic Corps and National Dignitaries on Friday, 6 January 2023 at Unity Palace.

Members of the Diplomatic Corps set the ball rolling at the Hall of Ambassadors with a speech from the Dean, H.E. Paul Patrick Biffot, Gabonese Ambassador to Cameroon. He praised the leadership of President Paul BIYA in the fight against the COVID-19 pandemic and his handling of sub-regional issues, including the crisis in the Central African Republic.

Ambassador Paul Patrick Biffot equally commended Cameroon’s resilient economy – affected by the conflict between Russia and Ukraine. He also lauded her brilliant organisation of the Africa Nations Cup and participation at the FIFA World Cup in Qatar.

President Paul BIYA responded immediately and thanked the Heads of Diplomatic Missions for their warm message. He expressed joy on meeting them after a two-year break due to the COVID-19 safety measures.

The Head of State made an appeal for the international community to address the root causes of conflicts in Africa and establish coherent financial mechanisms in order to boost the development of the continent.

“I would like to reiterate here that Cameroon remains committed to the peaceful resolution of conflicts through dialogue and negotiation,” he emphasised.

The Head of State’s address was followed by handshakes and brief chats with all the diplomats.

The second phase of the ceremony to present New Year wishes to President Paul BIYA was held at the Banquet Hall with 35 delegations of the national constituted corps. These included, among others, the President of the Senate, the President of the National Assembly, the First President of the Supreme Court, Members of Government, defence and security officials, heads of political parties, trade unionists, religious leaders and senior officials of the Presidency of the Republic.