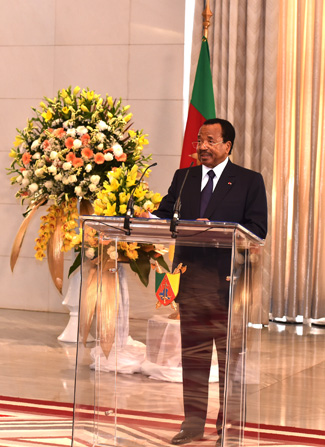 Members of the Diplomatic Corps,

It is always with much pleasure that I welcome you at the start of the year on the occasion of the solemn ceremony of presentation of New Year wishes. It is a great moment of communion.

I would like, The Dean of the Diplomatic Corps, to thank you sincerely for your encouragement and your kind words about Cameroon, your host country. I am pleased to receive your wishes for my country, my family and myself.

The year that has just ended was marked by the exacerbation of terrorism and the slowdown of global growth.

A shady jihadist group that originated in the Middle East is spreading. Its adverse effects have extended to other regions, especially to Africa and Europe.

The atrocities committed by the Islamic State, notably in Syria and Iraq, have caused great chaos in that part of the world.

In a bid to stem the chaos, an international coalition is carrying out air strikes designed to neutralize the Islamic State.

Cameroon supports all initiatives aimed at finding a lasting solution to this situation. For any compromise to be viable, it must take into account the legitimate political and economic interests of all the parties concerned.

These persistent tensions in Syria and Iraq are compounding the resolution of the Israeli-Palestinian conflict.

In Libya, the return to normalcy is still awaited. Our wish is for a National Unity Government that would accelerate its advent.

In the Sahel region, the jihadists remain active in Mali. The recent Bamako attacks serve as a reminder to us.

Our country, as you all can see, has been forced into a war against the Boko Haram sect for nearly two years now.

This shady terrorist sect, which claims to have pledged allegiance to the Islamic State in West Africa, has brought death and desolation around Lake Chad.

Cameroon has fiercely resisted this attempt at destabilization and violation of its territorial integrity.

Our Army, supported by the entire population, has not surrendered a single centimetre of our territory to the aggressors.

Better still, it has, on many occasions inflicted severe military setbacks on them with their bases destroyed, equipment and material seized, hostages freed, prisoners taken and so on.

I would like to take this opportunity to solemnly thank those friendly countries which, through their support, have demonstrated their solidarity in this fight.

Having been routed on the war front, the Boko Haram terrorist group seems, for the time being, to have resigned itself to the hideous tactics of suicide attacks.

Cameroon welcomes the fact that the Multinational Joint Task Force is now operational and active on the ground.

Well beyond the Middle East and Africa, the deadly activities of jihadist terrorists reached Europe in 2015, taking numerous lives.

This development vindicates those who, from the very start, have been advocating for a global response to the said phenomenon, and this was rightly recalled earlier by the Dean of the Diplomatic Corps.

Terrorism can be defeated only through joint and resolute action by the international community. We need to pool our intelligence resources and our combat efforts.

In this fight, I believe it is also important to find suitable remedies to inequities and poverty which provide breeding ground for terrorism.

The United Nations and the international community should address them as a priority.

Another fall-out of the unstable situation in the Middle East is the displacement of hundreds of thousands of refugees.

Such migration of an unprecedented scale in modern history, places the European Union in a dilemma: stick to its humanistic ideals and host the migrants, or keep them on its periphery, or even send them back home.

On this issue of migrants, a distinction has recently emerged between war refugees from the Near East and the so-called economic migrants.

The former would be welcomed, while the latter would be held on the EU periphery, waiting to be sent back to their countries of origin.

Solutions to this difficult issue must be consistent with morality and human values.

In this regard, only human solidarity can provide reasonable solutions.

In Africa as well, conflicts and terrorist atrocities are causing large-scale migration. Cameroon, for instance, has been forced to host thousands of refugees mainly from the Central African Republic and Nigeria.

Faced with such an influx of helpless people, the only solution is human solidarity. We share the little you have, and we appeal for assistance. The essential thing is to fulfil our duty to mankind.

Distinguished Members of the Diplomatic Corps,

Security is rightfully an existential prerequisite for all peoples. Nevertheless, it is important to remember that only development, which is the new name for peace, can guarantee the survival of nations.

Today’s world has trouble fulfilling the required conditions for such inclusive development.

The world economy is marked by a significant slowdown of global growth.

There is a resultant decline in the economic performance of emerging countries and an abrupt end to a decade of good performances in developing countries.

African economies in particular have been weakened by their heavy dependence on global commodity markets.

Conversely, growth in developed countries is witnessing a slight increase.

This shift in zones of growth is due to the drastic fall in commodity prices, particularly oil, but also all other commodities.

To stay afloat, many developing countries, including Cameroon, have opted for economic diversification. Even then, victory is far from certain.

In fact, global economic and financial prospects point to the fact that the current deterioration in the terms of trade will continue.

A greater cause for concern is the progressive tightening of conditions for accessing international financing.

Under such circumstances, it is only through genuine international economic solidarity that any policy of economic diversification could succeed.

This applies to the economy and to other major topical global issues. International economic solidarity should hinge on two key pillars, namely shared prosperity and responsibility.

With these principles, we can combat the globalization of indifference and build genuine world peace and brotherhood.

It was on the strength of such solidarity, and the awareness that we have a common destiny, that we travelled to Paris to attend the 21st Conference of the Parties on Climate Change.

During COP21, Cameroon made a dual appeal to save Lake Chad and to preserve the Congo Basin. Mr Dean, we thank you for echoing this on behalf of members of the Diplomatic Corps.

At COP21, Cameroon committed itself to reducing its greenhouse gas emissions by 32%.

Hence, we will review some aspects of our development plan.

Such review requires substantial funding and the transfer of major technologies. This is another area for the expression of the new spirit of solidarity.

In this regard, we want to hail the promise made in Paris by industrialized countries.  They did renew their undertaking to provide developing countries USD 100 billion yearly.

This represents a milestone in resolving a problem that threatens the survival of mankind.

The United Nations crystallizes the ambition of peoples to build together lasting peace based on shared prosperity, effective solidarity, and respect for human values.

Such is the meaning of both the new commitment to peace and the new sustainable development agenda adopted in New York in September 2015 during the celebration of the 70th anniversary of the United Nations.

Distinguished Members of the Diplomatic Corps,

I would be obliged if you would convey my wishes to the distinguished authorities that you so worthily represent here.

I also extend to you, your aides and your families, my most sincere wishes for happiness, health and success in 2016.

Thank you for your kind attention.