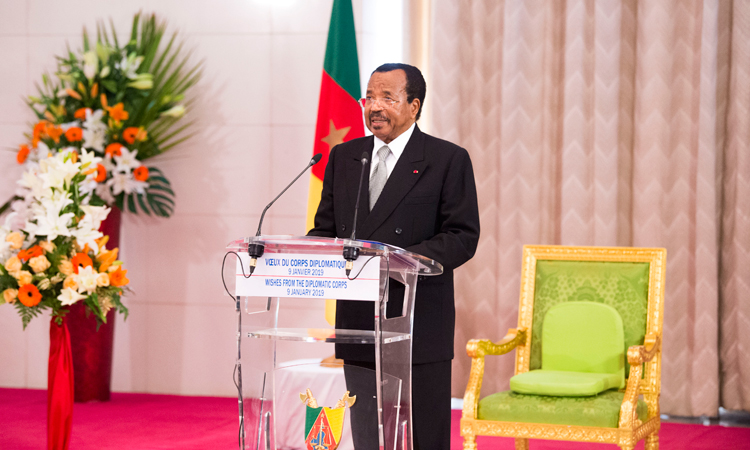 Let me start by thanking you for all the kind words you have just spoken about my country and the people of Cameroon, as well as my wife and me.

Last year, on the same occasion, I asked the following question: “Can it be concluded that the tensions of the recent years are easing and that the world is entering a new era that is more conducive to economic and social progress?” I acknowledged, then, that it was too early to answer this question.

It is obvious that the question is in abeyance given the prevailing instability in international relations.

Although fighting in Syria and Iraq in the Near and Middle East is only sporadic, the future of the region will remain uncertain as long as the two major powers in the area do not reach a workable compromise, as illustrated by the situation in Yemen. Also, the Israeli-Palestinian conflict seems to have been “frozen” indefinitely.

It is difficult, under the prevailing conditions, to imagine how the major powers with predominant and conflicting influence and interests in the region could contribute to restoring stability.

Though defeated in the Near East, the Islamic State has activated its Jihadist cells in North Africa and in the Sahelian strip. Despite being held in check militarily, it still has an enormous capacity to cause harm in various African countries. Cameroon has had a bitter experience in its fight against Boko Haram.

Repelled beyond our borders, this terrorist movement now poses only a residual threat which, however, compels us to remain very vigilant. That is why we will maintain close collaboration with Lake Chad Basin Commission member countries which, in late November in Ndjamena and mid- December in Abuja, undertook to be on the alert.

The instability I mentioned earlier on has not only taken the form of tensions or armed conflicts. It is also the outcome of the calling into question of the post-World War II and Cold War balance of power which the United Nations and its Security Council were guarantors.

Over the last decades, this system of collective security can be credited with preventing the outbreak of a global conflict and, after several setbacks, enabling many newly independent countries to live in peace and embark on the development process. It is against this backdrop that the globalization of trade finally gained momentum.

Yet, very recently, nationalist tendencies have resurfaced around the world bringing about a two-pronged protest, namely:

- against multilateralism incarnated by the United Nations and accused, among other things, of sacrificing national interests  for allegedly “questionable” causes such as the fight against global warming;

- and against globalization which is accused of encouraging relocation and dumping and, hence, damaging the industrial heritage of some countries.

As expected, this renewed nationalism came along with protectionist measures, followed by negotiations or retaliatory measures.

Although for now it would be an overstatement to talk of a “trade war”, there is, however, concern that this trend may spread worldwide. We may thus be faced with a trade contradiction in which no one stands to gain, certainly not developing countries whose economies are heavily dependent on the outside world.

The recent G20 Summit held in Argentina showed that the major world economic powers were not indifferent to the consequences of protectionism. Apparently, a majority of them are in favour of free trade, although it is not clear if the issue has been resolved.

Such stiffening of trade relations has also affected the political domain. Thus, relations between the United States and Russia are strained over Crimea and Ukraine, and the 1987 US-Russia Intermediate-range Nuclear Forces Treaty which Washington intends to denounce.

Within NATO, the assignment of responsibilities and the design of a European defence system are controversial.

Indeed, the European Union is not spared by the nationalist tendency. Apart from Brexit whose consequences are still uncertain, there are henceforth two “blocs”: one composed mostly of Western countries that are proponents of integration; the other, comprising countries of former Eastern Europe, more inclined to a less restrictive federation. In such conditions, there is reason to worry over the future of the “European dream”.

The Asia-Pacific zone is also caught in cross-currents. Whereas the United States is trying to reconcile with North Korea, a laudable action though of concern for Tokyo and Seoul, China, for its part, is annoyed over what it considers an intrusion into its strategic sphere.

Regarding major multilateral issues, global warming remains a subject of spirited debates. Although a large majority of countries – including Cameroon – are still committed to COP21 decisions, implementation of the Paris Agreement is still dependent on the mobilization of huge amounts of resources, which implies intense negotiations. The latest of such negotiations which were held within the context of COP24 in Poland finally resulted to an agreement.

Migration has also continued to be an issue of passionate debate. We are all aware of the causal link between this phenomenon and the rise of populism. The United Nations Global Compact for safe Migration raised much hope. However, the Marrakech negotiations clearly showed that it met with resistance and that it failed to clarify many issues. In the meantime, the situation of migrants and refugees is still very alarming, despite the efforts made by the UNHCR.

All in all, it should be admitted that the rise of nationalism and populism has significantly changed the atmosphere of international relations. In Europe and North and South America, advocates of these ideologies have acceded to power. This will definitely have consequences on the balance of power on the planet. The writing is already on the wall. Will the new world be better than the old? That is the question.

For a country like Cameroon that exports raw materials whose prices are determined on foreign markets, it would no doubt be indispensable, as I have often said, to reduce its dependence on the outside world. Indeed, it will be necessary to carry out initial processing of its products, develop the industrial sector to reduce imports, stimulate trade which is still clearly insufficient within regional groupings and explore new markets in the rest of the world.

Whatever the circumstances, Cameroon will strive as much as possible to develop its trade with its traditional partners of the European Union. Similarly, we will pursue an active policy of economic cooperation with China, where I travelled to last March on a State visit and in September to attend the China-Africa Cooperation Forum. These visits confirmed the remarkable participation of this great friendly country in our development projects.

We will also seize all the opportunities offered by our excellent relations with Japan and the Republic of Korea, as well as with any country willing to forge mutually beneficial cooperation ties with us.

Moreover, we have, like in the past, maintained close ties with the African Union. We endeavoured to contribute to the reform of its institutions, which is expected to enhance integration and ensure its financial autonomy.

My country also had the pleasure of welcoming Mr Moussa Faki Mahamat, Chairman of the Commission of our continental organization. His visit was marked by the signing of headquarters agreements for the establishment of three pan-African institutions in Cameroon.

You would recall that last year, I deplored before you the fact that the spirit of conciliation is on the wane on the global scene. In this regard, the situation does not seem to have improved significantly.

As scientific and technological advancement is endowing humanity with more and more extraordinary powers each day, will the “new world” that is being heralded take a wrong turn and revert to the divisions and quarrels of yesteryear? Our future depends on it. May common sense prevail.

I would now like to request you to kindly convey our best wishes for the New Year to the distinguished authorities that you represent.

I extend to you and your families my most sincere wishes for happiness, health and success in 2019.

Thank you for your kind attention.