Speech by His Excellency Paul BIYA, Commander-in-Chief of the Armed Forces on the occasion of the graduation ceremony of the 36th batch of the Combined Services Military Academy (EMIA) christened “Unity and Diversity” 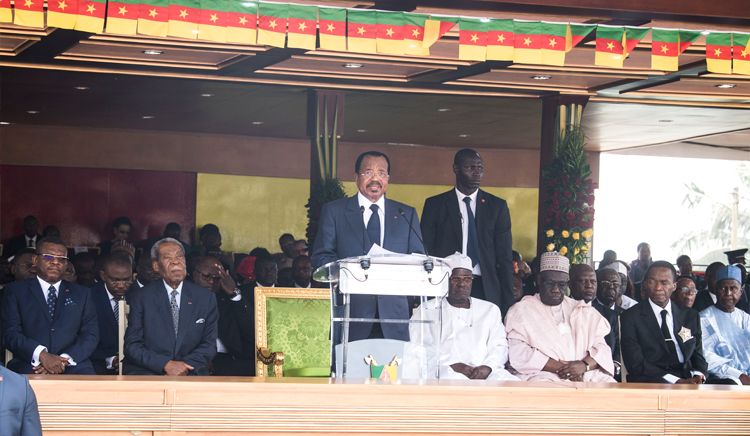 As you are aware, our country has for some years now been facing various security threats.

Thanks to the courage of our population and the bravery of our Defence and Security Forces, the threat posed by Boko Haram in the Far-North Region has been significantly reduced. However, recent attacks by this terrorist group have shown the need to remain very vigilant.

The situation on our eastern border, especially in the Adamoua Region, also calls for our attention. Our population, particularly livestock breeders, are victims of criminal groups specialized in kidnapping for ransom. I have instructed our Defence and Security Forces to put an end to these criminal acts.

As I said recently, the situation in the North-West and South-West Regions is of utmost concern to me. Basing their actions on a secessionist pipe dream, armed groups have in recent months spread death and distress, killing, mutilating, and burning and destroying valuable infrastructure in these regions.

The people in these two regions are the main victims of the atrocities caused by these criminal groups.

I would like to assure them, once again, that the entire Nation stands by them in this hardship. It shares their concerns about their safety and their aspiration for a return to calm and normal social life. I will spare no effort to ensure that this legitimate aspiration becomes a reality.

Since the outbreak of this crisis, I have continued to seek ways and means of ensuring a peaceful solution. I will not review the long list of measures taken to that end.

The National Disarmament, Demobilization and Reintegration Committee that I recently set up is already at work. The initial contacts on the ground are encouraging. I once again appeal to our youths who allowed themselves to be lured into a dead end to get back on the right path, rebuild their lives and participate, alongside their other brothers and sisters, in nation-building.  As for those criminals who will persist on the path of violence, they know what awaits them. The Forces of Defence and Security will continue to discharge their duty with firmness, determination and professionalism.

Young Officers of the "Unity and Diversity" Batch,

It is within this context that you are joining the great family of defence forces. It is an honour for your families and you. I congratulate you.

I also wish to congratulate you on your decision to join the military profession, which is at the same time noble, demanding and exciting. It requires courage, self-denial and a sense of sacrifice.

The career you have just embraced requires you to observe strict discipline, display unfailing loyalty to republican institutions, be ever-ready to serve, and show complete dedication. Like your seniors who have distinguished themselves on the battlefield, I urge you to pursue the task of defending and protecting the Fatherland.

I also urge you to remain true to the values ​​that are the bedrock of our Nation and that guide the action of our Army. Together with your comrades, you will henceforth be the shield of your country. But, never forget that you are also expected to be the shield of our people. Strive to earn their respect and love through your courage, rectitude, self-denial, solicitude and professionalism. Such values ​​are as important as combat science.

Young Officers of the “Unity and Diversity” Batch,

Your batch name is fully justified in the current context. It reminds us not only of the very essence of our country and our Army, but also the foundation on which our Nation is being built.

Far from being a handicap, Cameroon’s cultural, linguistic and sociological diversity is indeed one of its most valuable assets. As a source of creativity and vitality, our diversity blends harmoniously with our desire to live together, to lay the groundwork for our constant quest for the consolidation our country’s unity. We do not only draw inspiration from our diversity, but also the determination and strength needed to meet our challenges.

You hail from all the regions of Cameroon. Throughout your career, your batch name should serve as a spur, and also as a compass to help you never to lose sight of the imperative need for the defence of your country’s unity.

You will thus remain loyal to the memory of your elders who distinguished themselves brilliantly in preserving the peace and territorial integrity of our country. Many of them did not hesitate to make the supreme sacrifice in the defence of these ideals. I want to pay glowing tribute to them here and assure them that the Nation will ever be grateful to them.

Young Officers of the “Unity and Diversity” Batch,

On this memorable day and on behalf of the entire Nation, I am delighted to, once more, extend my hearty congratulations to you.

I wish to express my sincere gratitude to your civil and military instructors who accompanied you with dedication and competence throughout your training.

I also hail the success of your comrades who came from the Gabonese Republic, the Republic of Congo and the Central African Republic to undergo the same training with you. Their presence is testimony to the trust that exists between Cameroon and their respective countries. It is also a recognition of the quality of training provided by EMIA.

Your career is now mapped out for you. You are called upon, from now on, to join in the great and noble struggle to defend our territorial integrity, national unity and republican institutions.

That is your duty.

That is your mission. It is sacred.

You will accomplish it with commitment and patriotism.

You will accomplish it with honour and fidelity, in keeping with the motto of our Army.

Draw inspiration from the self-denial and sense of sacrifice of your elders.

You can count on my constant solicitude and the unanimous support of the Cameroonian people.