An enthusiastic crowd of CPDM militants and well-wishers welcomed the Head of State His Excellency Paul BIYA and Madam Chantal BIYA as they alighted at the Nsimalen International airport on Friday 27 March after a private stay in Europe. On hand was also a team of senior state personalities to welcome the First Couple, including Senate President Marcel NIAT NJIFENJI, the Speaker of the National Assembly CAVAYE YEGUIE DJIBRIL, the Prime Minister Head of Government Philemon YANG, the Secretary General of the Presidency of the Republic Ferdinand NGOH NGOH, and many other Government and Administrative authorities. 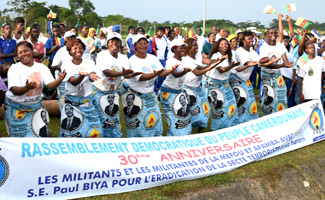 President Paul BIYA hand brief discussions with the President of the Senate, the Speaker of the National Assembly, the Prime Minister and the Secretary General of the Presidency. The First Lady on her part was having a light-hearted briefing from the wives of the close collaborators of the Head of State.

The President of the Republic and Madam Chantal BIYA acknowledged loud acclamations from the throng of militants who assembled at the airport before boarding their motorcade for the ride to Unity Palace. The streets of the capital city were full of cheering militants and ordinary citizens eager to welcome the Head of State and his wife back home. A mammoth crowd gathered at the entrance into Unity Palace to show their love and concern for the Presidential Couple.