French and Chinese Investors at the Unity Palace

The President granted separate audiences to the Chairman and CEO of Electricité de France (EDF), and the Vice-President of Huawei Technologies on 6 June 2017. 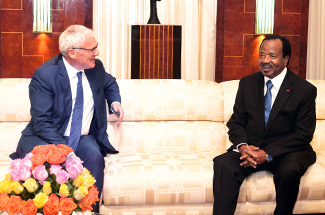 The President of the Republic of Cameroon, His Excellency Paul BIYA has met with Mr. Jean-Bernard Lévy, the Chairman and CEO of Electricité de France (EDF). They held talks at the Unity Palace on 6 June 2017.

Speaking to reporters after the meeting, Mr. Jean-Bernard Lévy said he reassured the Head of State on the progress made towards the construction of the 420MW Nachtigal Hydroelectric Project on River Sanaga.

This project is under the coordination of the Nachtigal Hydro Power Company (NHPC). According to NHPC, the roller compacted concrete dams, a headrace channel, a power plant with seven generating units, a generation substation, and a transmission line will be commissioned in 2021. 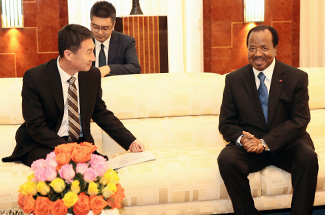 The President of the Republic of Cameroon, His Excellency Paul BIYA equally held convivial discussions with Mr. Li Dafeng, Vice-President of Huawei Technologies.

Mr. Li Dafeng presented the prowess of the Chinese multinational networking and telecommunications equipment and services company to the Head of State. He made an appraisal of Huawei’s penetration into the Cameroonian market, and promised to become a reliable partner in the development of Cameroon’s digital economy.

The Huawei bigwig stated that the company was inspired by President Paul BIYA’s message during the 50th anniversary of the youth day, to start the “Seeds for the Future” project in 2016. It is aimed at transferring technology, with the training of 10 Cameroonians annually.