The President of the Republic, His Excellency Paul BIYA will soon pay a State visit to the People’s Republic of China. This was revealed on Tuesday 13 March 2018 by the Chinese Ambassador to Cameroon, H.E. Wei Wenhua, following an audience at the Unity Palace. 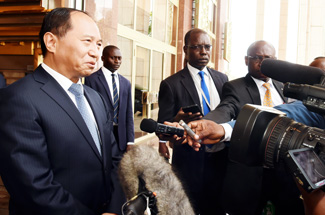 Ambassador Wei Wenhua announced that President Xi JINPING and his Cameroonian counterpart will have their first top-level meeting in the third quarter of March – after the first session of China’s 13th National People’s Congress. He emphasised that it will be an honour to President Paul BIYA – who will be the first foreign dignitary to be received by the new leadership in China.

The Chinese diplomat also indicated that the upcoming visit will serve as an opportunity to reinforce the longstanding and fruitful cooperation ties that exist between Cameroon and China.