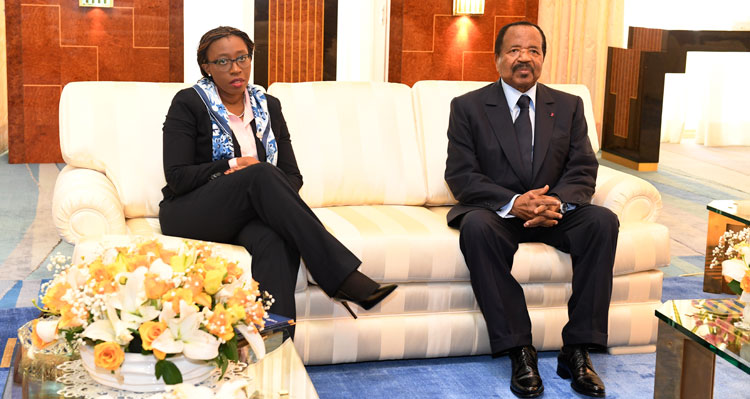 The President of the Republic, His Excellency Paul BIYA granted audience to Vera Songwe, Executive Secretary of the United Nations Economic Commission for Africa, on 18 April 2019 at the Unity Palace. 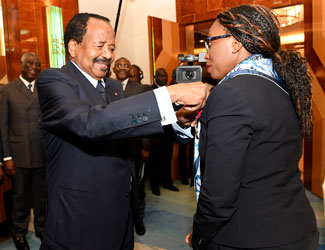 The Head of State and the Cameroonian-born economist discussed the following issues: economic growth in Cameroon, the need for the Cameroonian Government to ratify the African Continental Free Trade Area Agreement (AfCFTA), and the development of the digital economy.

Vera Songwe was decorated by the Head of State with the medal of Grand Officer of the National Order of Valour.

Speaking to reporters at the end of the audience, the ECA Chief said she thanked the Head of State and the Cameroonian Government for hosting UN agencies including the ECA headquarters that is located in Yaounde.

The high-level guest noted that Cameroon’s diversified economy can attain a 10% growth rate, which is a major prerequisite to reach the kind of emergence that the Government has envisaged. Vera Songwe disclosed that she seized the opportunity to show the Head of State the different areas where Cameroon is competitive and can improve on its competitiveness. 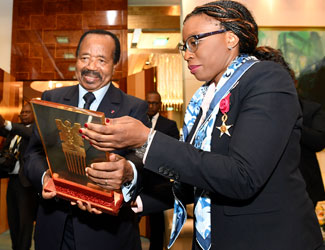 It was in this light that they exchanged views on the ratification of the African Continental Free Trade Area Agreement (AfCFTA), which is the signature African agreement from the African Union as part of Agenda 2063.

“Cameroon is such an important economy in Central Africa when we look at the overall region with peace and stability, and I think that the AfCFTA is an important part of the equation to reach emergence,” Vera Songwe explained.

“Other countries will be celebrating the AfCFTA ratification in July and we encourage the Government of Cameroon to join the party and also ratify,” she added.

President Paul BIYA and Executive Secretary Vera Songwe also talked about the importance of regional integration especially in the fight against climate change in the Lake Chad area.

They spoke at length about the digital economy that can provide more jobs to youths and women.

Vera Songwe said that Cameroon can do more to increase access, reduce cost and improve quality. She added that broadband needs to be faster, while the cost of gigabits needs to be cheaper, and was delighted that the Government is committed to ensure that every Cameroonian has an identity and can participate to develop the digital economy.